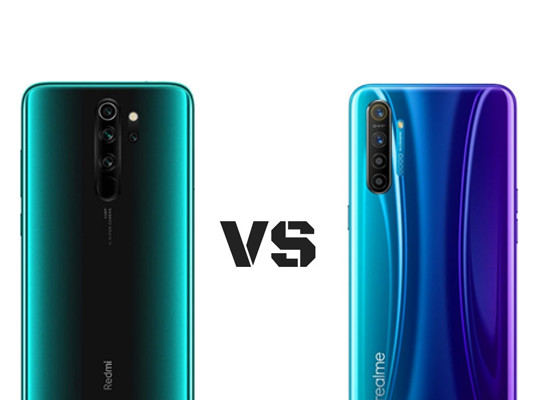 Budget phones have become plentiful in the market and they have been bought widely by the customers. The budget phones before did not have much quality when compared to the budget smartphones running in the market presently. Redmi Note 8 Pro and Realme XT have created a buzz in the town lately as they come at an affordable price while having quality specifications. Since they come in similar prices and specifications, there is a dilemma for the customers when it comes to selecting one of them. In this article, we compare the specifications of Redmi Note 8 Pro and Realme XT to determine which one is better.

The buttons are placed more conveniently in Realme XT. While the volume button and the lock button is placed a little high on the right side of Note 8 Pro, Realme has the lock button on the right side and volume button on the other side. Though both the phones come in quad-cameras, they are placed differently. While the camera is centered on the rear panel of Note 8 Pro, Realme XT has it placed on the right side of the rear panel. Redmi Note 8 Pro has its fingerprint scanner just below the rear camera but Realme has its scanner on the display. Both come in a dedicated SD card slot and dual Nano-SIM slots.

The USB Type-C ports are accompanied by the microphone, 3.5mm headphone jacks, and loudspeakers in the bottom panel of both the phones. Unlike Realme XT, Note 8 pro possesses an IR emitter at the top giving it a better functional edge over Realme. Maybe because of the differences in the battery, Realme XT weighs less (183g) than Note 8 Pro (200g). Though it is not that heavy to carry. There is nothing much to argue much when it comes to the design of Note 8 Pro and Realme XT as both of them have very similar characteristics.

Redmi Note 8 Pro and Realme XT possess a very decent quad-camera. The combination of the cameras is also the same with a 64MP primary camera, an 8MP wide-angle camera, a 2MP macro camera, and a 2MP depth sensor. However, the selfie camera differs. Realme XT boasts a 16Mp front camera and on the other hand, Note 8 Pro possesses a 20MP selfie camera The camera application of both the phones looks good. Although, the camera app of Note 8 Pro is better as far as user-friendliness is concerned.

The camera in both phones is capable of giving crisp images and is quick to focus. Though the daylight photos of Realme give better details, the HDR is automatically enabled in a bright environment on both phones. Thanks to the AI, the night scenes are captured well in both the phones as the AI changes the settings automatically. Whether it be the focusing or detailing, the closeup shots of both the phones are good. Though Realme has more accurate details than Redmi, closeups by both the phones are impressive but Note 8 Pro has surprisingly better results than Realme. You can take decent portrait shots in both phones with perfect blur levels. Coming to the micro camera, both phones use the LED flash efficiently and give good pictures. The selfie camera in Note 8 Pro and Realme XT is also capable of furnishing with crispy images. Talking about the video, both phones can give a framerate of 30fps at 1080p, nevertheless, Realme XT has a slighter edge over Note 8 Pro in terms of quality. No matter there are differences, the cameras of both phones look compelling.

Stutter-less and non-laggy usage are what everyone needs. Luckily, the performance of Redmi Note 8 Pro and Realme XT is excellent. Redmi Note 8 Pro is equipped with MediaTek Helio G90T chipset that is suitable for gaming. Realme XT, on the other hand, features Qualcomm Snapdragon 712 that helps in giving uninterrupted usage. From Navigation to Multi-tasking, everything can be done seamlessly in XT as well as Note 8 Pro. With Note 8 Pro and Realme XT, it is possible to play high-end games in full settings. In total, the performance of both the phones are top-notch and can satisfy you any day

The vibrant colors in which both phones are offered is one of the main factors that make it attractive. Realme XT is offered in colors like Pearl White and Pearl Blue, whereas Note 8 Pro is offered in colors like Gamma Green, Halo White, Shadow Black, and Electric Blue. XT comes in 4GB RAM & 64GB ROM, 6GB RAM & 64 GB ROM and 8GB RAM and 128GB ROM. Redmi Note 8 Pro is available in the market in 6GB+64GB, 6GB+128GB and 8GB+128GB variants.

Redmi Note 8 Pro vs Realme XT - Which one to buy?

Choosing one of them is definitely a tough call. As far as the price is concerned Note 8 Pro would be the ideal choice. But that does not mean Realme XT is not worthy of buying. Both phones are excellent in performance and value for money. Whatever is your selection, ensure that the product you buy is genuine. Place your order from online stores like myG where you can find genuine products at the best price. Moreover, at myG, you can get your phone delivered the same day.