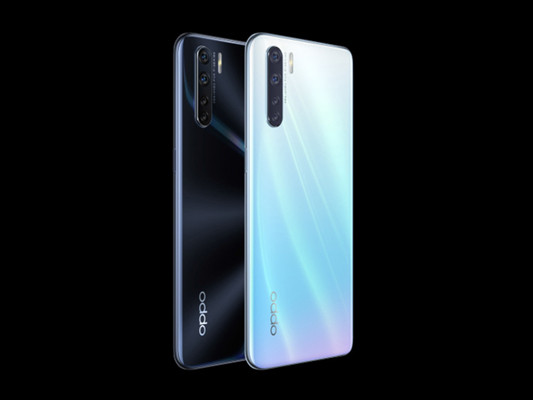 Oppo has stepped into 2020 by launching Oppo F15 which is a successor of Oppo F11. Oppo has brought some essential updates like an in-display fingerprint scanner, Quad-camera, and handy design. Priced at Rs.19,990, F15 competes against some impressive players like Realme X2, Poco F1, Redmi K20, Redmi Note 8 Pro and Nokia 7.2. Oppo is determined to compete as they have equipped F15 with a thumping 8GB RAM, VOOC 3.0 fast charging and a 48MP quad-camera. Oppo has always focused on manufacturing phones with a premium design and F15 also falls into that category. Let us see in detail whether Oppo F15 is capable of thriving.

The design of F15 is ergonomic as well as attractive. The official tagline of F15 says 'Flaunt it your way' because it is worth being flaunted. Oppo offers F15 in 'Unicorn White' and 'Lightening black' color variants and both the variants look striking. Unicorn white is more capable of hiding the fingerprints comparatively. The weight of 172g and the thickness of just 7.9mm is a highlight of F15 that makes it much handy. The edges of the phone are curvy and this makes it more comfortable to handle though the sides are a bit slippery with a glossy finish. The selfie camera is conveniently placed inside the notch at the top of the display panel. Coming to the rear side, the panel looks stunning with the glossy finish. Either side of the back panel is curved a bit to boost the comfortability. Both the whopping 48MP quad-camera and the elegant logo of Oppo is set vertically on the back panel. The former is at the top left corner and the latter at the bottom of the same side. The camera bumps a little bit but not too much. Corning Gorilla Glass 5 protects the front screen but it is absent on the rear panel. Instead, the back panel is laminated. Coming to the ports, F15 boasts a headphone jack, USB Type-C port and a speaker on the bottom panel. The sim card tray with a dedicated slot for sd card and the volume buttons are placed conveniently on the left side and on the opposite side, the lock button is placed. The design in total gives it a premium look. Normally, phones with big display weigh a little but surprisingly F15 is light and slim.

Just like any other Oppo phones, F15 boasts a stunning display. It flaunts a 6.4 inch AMOLED full-HD+ display with an aspect ratio of 20:9 and a resolution of 2400x1080 pixels. The display is a stupendous one capable of delivering sharp images. Even the high definition videos and games look sharp and compelling. The display is vivid in every aspect like the colors, sharpness of text and icons, etc. In every light condition, it gets sufficiently bright and legible. F15 features several options for display such as color temperature adjustment, Nightshield, Low-brightness Flicker-free Eye, etc. In a nutshell, the display of F15 is one of the best you could get in this price segment.

Oppo has bettered the camera compared to its predecessor Oppo F11. Equipped with a 48MP primary camera, 8MP wide-angle camera, 2MP portrait lens, 2MP monochrome lens, and a 16MP selfie camera, F15 is versatile as far as the camera is concerned. Though the camera app is similar to the normally seen app in other Oppo devices, it lacks certain features for selfie camera like super-steady video and Night mode.
The main camera lets you capture pretty detailed photos in daylight. The vividness and sharpness are fair enough to make the photos appealing and the noise is very less.

Talking about the wide-angle camera, it features autofocus that makes the images better in detail. With the wide-angle camera, you could also take close-up shots, otherwise known as macro shots. The macro images taken in Oppo F15 are also sharp and detailed. The wide-angle camera helps to spot the macro details on the subject when moved closer. The collaboration of wide-angle and macro enhance the convenience compared to the dedicated macro lens as you do not have to change the settings to wide-angle to macro or vice versa.

Just like other lenses, the Portrait lens is also capable of furnishing you with images with the best clarity. There is a provision to adjust the blur before taking a snap. Under good light, everything like edge detection, image quality, etc looks decent.

The landscape photos in low light lack a little quality and have a bit noise but the night mode can help you tackle these issues. However, it is unable to improve details vastly. Just like this, the wide-angle lens also gives similar detailed images in low light but the close-up shots in low light are better with respect to color, detail, and noise.

The selfie camera stands out regardless of the light condition. The skin textures are smoothened a little in the snaps but thanks to the HDR, it makes the photos better by representing the colors well. The night selfies are also made decent with the help of artificial light. However, the portrait in the front camera needs improvement despite being good. The video compartment is all good. The videos shot in all the lenses looks pretty decent with a maximum resolution of 1080p. The camera also features 2x zoom, 5x zoom, Timelapse, Panorama, Slow-motion, AR stickers, and Expert. In total there is nothing negative in the area of the camera.

Though F15 packs a MediaTek Helio P70 chipset which is not the latest one, it performs impressively. The device does not heat during relentless camera usage and even while hectic gaming. F15 lets you play high-graphic games like PUBG smoothly but in medium graphic settings. In a slightly reduced graphics quality, you could play Asphalt 9 too seamlessly. To make your gaming stint uninterrupted, F15 features a game assistant that allows you to block notifications, etc. The thumping 8GB lends a big hand in tackling stutter. Moreover, you will not experience any lag during multitasking. F15 is also is quick to get unlocked through fingerprint and face recognition. Face unlocking works pretty well even in low light conditions. In total, you will be pleased with F15's performance.

F15 is equipped with a whopping 4025mAh battery. With one charge you could use the phone for one day with extensive gaming and camera usage. Thanks to the VOOC 3.0 charging, F15 charges pretty fast. In just over an hour it gets charged to 100%. The battery in overall is good enough for the price of F15.

Oppo's offerings have often come in appealing colors and F15 also comes in captivating colors such as Unicorn White and Lightening Black. Though the former is named Unicorn white, it has a gradient of the purple and this color also allows to hide smudges and fingerprint, unlike the black variant. Both color variants give F15 a premium look. As in the storage and RAM, it comes in 8GB RAM and 128GB internal storage as of now. Whether Oppo will launch a different variant is uncertain at the moment.

Just like any other Oppo smartphones, F15 is also priced fairly at Rs.19,990 and it is available at the online and offline stores of myG.

In a nutshell, F15 is a decent upgrade over F11 and all the phones that come at that range. Everything from the design and display to the performance and battery is pretty good in F15. At this price segment and with these many features it is a good competitor for Realme X2, Poco F1, Redmi K20, Redmi Note 8 Pro and Nokia 7.2. Order the Oppo F15 from myG and get it delivered the same day.