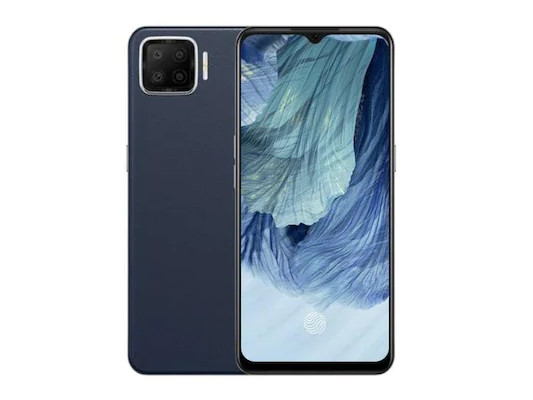 Oppo has delivered excellent phones hitherto and recently they unveiled two new models of the F series - Oppo F17 Pro and Oppo F17. The former was launched last week and is getting good responses at the moment. Now, Oppo has announced that the latter will be up for grabs in the second half of September. They have also revealed the price and specifications of the phone. Let's have a glance at the features of F17.

As you know, the device is yet to be launched and only the photos are available at the moment. So, the explanation of the design of F17 can only be based on the photos and the specifications we have at present. F17 is a lightweight phone with 163g weight and it boasts a think-bezelled display with a waterdrop notch. The phone is flanked by a shiny frame which looks like aluminium. On the right side of the frame, you get the lock button and on the other side, there is a dual sim card tray. Moreover, they have placed the fingerprint scanner on the screen like the ones we see on the majority of today's smartphones. The rear part is quite similar to F17 pro though they have made teeny-weeny changes. On the top left corner, you get the quad-camera which has a delicately-looking glass-like covering. However, we think a back case can protect the lens since the bump is only small. Also, the camera panel is surrounded by a sleek silver frame which adds beauty. They have also placed flash to the right side of the panel. Unlike the square or circle type flash we normally see in the phones, F17's flash is a slim and a bit long one which stands vertically. In short, the design looks classy all in all and it'll surely be one of the reasons many will go for F17.

The display specifications of F17 look great on paper. It boasts a 6.44-inch full-HD+ Super AMOLED display with 408 PPI and 16m colours. Oppo claims that F17 has a 90.7% screen-to-body ratio. It also has a 60Hz refresh rate and 1080x2400 pixels resolutions. It's also said that the display comes with two important options: Sunlight screen which is apt to be turned on during daytime and Moonlight screen which is best while using the phone in a dark atmosphere. Normally the phones with similar display specification are capable of producing immersive pictures. So, we can hope F17 will deliver the same and amaze us.

The performance specifications of the F17 looks brilliant. It sports one of the latest chipsets which is Octa-Core Snapdragon 662 SoC and Adreno 610 GPU which can help run high-end games in good graphics. As in RAM, it's said that F17 will be available with 4GB/ 6GB and 8GB RAM. F17 runs on Android 10 which is combined with Oppo's Colour OS 7.2 that can make the interface quite attractive. By the looks of its specifications especially the chipset, we can expect good performance from F17. However, we can't provide a solid statement until the phone is launched in the market.

Oppo is renowned for its camera. We have seen how good the camera was in the models like F15, the latest F17 Pro, Oppo Reno 3 Pro etc. Oppo has gone with a quad-camera setup, in F17, which is now widely seen in many phones. The phone has a 16 MP main lens with f/2.2 aperture, 8 MP wide lens with f/2.2 aperture which can cover up to 119˚ angle, 2MP macro lens with f/2.4 aperture and, 2 MP depth lens with f/2.4 aperture. At the front, there is a 16MP selfie camera with f/2.0 aperture inside the waterdrop notch. As per Oppo, the camera app boasts several features like HDR, Panorama, AI beautification, night mode and a wide variety of filters. Since Oppo has delivered some excellent cameras, let's expect the camera department of F17 will be commendable.

The battery of F17 can be added to the list of best specifications surely. It packs a powerful 4000mAh Li-Po battery which supports 30W VOOC flash charge. As per the reports, it can furnish you with 4 hour talk time with 5 minutes of charging. It's also said that the battery can go up by 50% within 30 minutes and it can reach 100 per cent before 1 hour. For a phone at this price range, the battery looks excellent. Let's wait and see whether it performs as per the claims of Oppo.

On paper, the phone looks brilliant and in fact, it has one of the best specifications in this price category. F17 is likely to be available for sales from September 21st onwards. Let's wait and see how the phone really looks and performs. Once it's launched, ensure you have a look at it in our store. We offer phones at the best prices and most importantly, we'll deliver the products the same day.