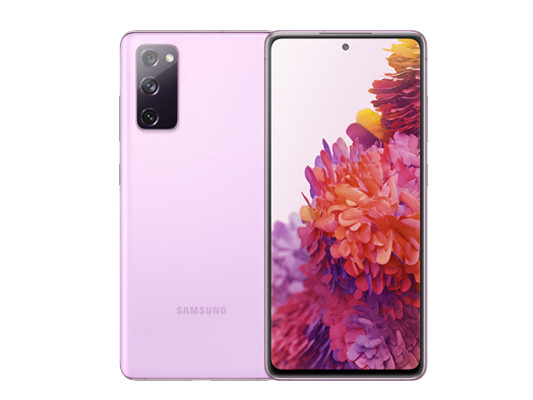 Broadening its catalogue, Samsung has launched Galaxy S20 FE - an ideal successor of Galaxy S10 Lite. This smartphone is available in several countries at the moment, however, in India, it'll be available to buy from 16th October onwards. The recent launches of Samsung like Note 20 or Note 20 Ultra, as you might know, had created a buzz but the price was a concern for many buyers. Varying from those models, S20 FE is placed in a much more affordable segment but without much compromise in the look and performance. In other words, it can be called the lite version of its sibling - Galaxy S20. This device is one of the most anticipated smartphones with many compelling features.

Let's go through its specifications and features.

At first glance, S20 FE looks pretty much similar to the Galaxy S20 model except that the former has a tad thicker bezels. On the front, you get the punch-hole selfie camera in the top centre of the Infinity-O-display. The four edges are perfectly curved which adds to the convenience of holding the phone. The phone is surrounded by a metal frame and the left side of the phone is kept button-free. Instead, the lock button and the volume button are placed on the right side. The sim card slot is placed on the top of the phone and on the bottom you get the USC Type-C port and speaker. The Headphone jack is unfortunately absent in the phone. One big difference in the design when compared to its siblings is the plastic rear panel which was glass in its predecessors. On the top left of the rear panel, Samsung has placed a rectangular camera module which looks almost similar to the module of S20. The design altogether looks pretty much premium.

Coming to the display, it looks really impressive on the specs sheet. S20 FE boasts a flat super AMOLED display which has a resolution of 1080 x 2400 pixels. Though the display isn't dynamic, it has a 120 Hz refresh rate which is more than enough to provide a smooth user experience. There is also a pixel density of 405 ppi and the display is equipped to go up to 679 nits of brightness. This display configuration looks impressive on paper and it's capable of delivering an immersive visual experience. Once we get our hands on the products, we can see for ourselves.

When it comes to the performance, we can expect a lot from S20 FE as it boasts a powerful Samsung Exynos 9 Octa 990 Processor which is accompanied by a 6GB or 8GB RAM. Having this processor and RAM means, the phone can potentially work swiftly without notable lag or stutter. As per multiple reports, the performance of the phone is stunning whether it be multi-tasking, scrolling through the menu, opening applications or even gaming. Furthermore, S20 FE supports 5G but as of now, only the 4G variant will be available in India. Coming to its graphic processor, it is equipped with Mali-G77 MP11 which is another impressive component of the phone which is capable of delivering high graphics. In short, the performance specs looks great and the performance is rated highly by many. Let's assume that the phone will perform seamlessly.

Triple cameras have become common and S20 also sports a triple camera with a 12MP wide lens, 8MP telephoto lens and, 12MP ultra-wide lens. This means the camera is flexible enough to take different kinds of photos. The camera of S20 FE also offers up to 3x optical zoom and 30x resolution zoom which means you need not move towards a subject to capture it no matter how far it is. The camera application also has a night mode which can significantly improve the brightness and sharpness of the images taken in dim light. On the front, the is a 32 MP punch hole camera, which also is capable of capturing fine images. Just like we have seen in S20, S20 FE also have a single take option which allows you to capture up to nine different types of photos/videos with a single press of the button. Apart from that, there are features like pro mode, panorama, food, night, live focus, live focus video, pro video, super slow-mo, slow-mo, and hyper-lapse. As per several foreign reviewers, the camera can take sharp images regardless of the light condition.

Just like we have seen in S20 Ultra, S20 FE is equipped with a 4500 mAh battery that supports 25W fast charging, however, it comes with only a 15W charger. Samsung claims that the phone can give enough juice to work for one full day with one charge. The phone also supports wireless charging but the box does not contain any wireless charger. We can expect the battery to perform well as the same battery has performed well in its predecessors.

S20 FE will be offered in 6 beautiful colours. Samsung mentioned them as "Shades to make the rainbow jealous" and they are indeed capable of making the rainbow jealous. Cloud Navy, Cloud White, Cloud Pink, Cloud Red, Cloud Blue and, Cloud Gold are the colour in which S20 FE will be offered at and all of them looks really striking. As in RAM and storage, the phone will come in 6GB RAM + 128GB, 8GB + 128GB, and 8GB + 256GB variants in which the storage is upgradeable with a micro SD card. During the launch, only the price of the 8GB + 128GB variant was revealed: Rs. 49,999. We can expect other variants to have a price with a few thousand difference.

Long story short, the specs look considering its price. In contrast with S20 FE's predecessors, the phone looks much more affordable and is value for money. For people who wanted to buy the likes of S20 or S20 Plus but refrained because of the price tag, S20 FE would be an ideal option. Every department of S20 FE looks brilliant on the paper. The phone will be on sale from October 16th onwards. If you are looking forward to buying it, you can find it at myG at the best price.